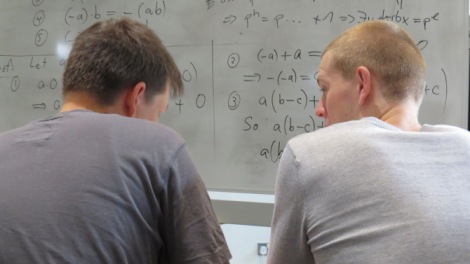 Students returning to PROMYS Europe are encouraged to revisit those parts of the number theory course that they didn't have time to explore fully as a first-year student.  There is always more to investigate, and returning students often welcome this opportunity to deepen their understanding.  Students will be able to talk to their counsellor and to the faculty to design the most suitable individual programme for them.

In recent years, courses for returning students have covered group theory, graph theory, abstract algebra. The courses fit well with the number theory course and are aimed at returning students but are also accessible to students participating in PROMYS Europe for the first time.

Returning students also have the option of working in a small group on a research project.  Projects are designed by leading mathematicians, and give returning students an opportunity to explore an area of mathematics in great detail and potentially to work on open research questions. In recent years projects have included:

Returning students working on research projects have been mentored by PhD students from the Oxford Mathematical Institute.