PROMYS Europe is based at Wadham College, which celebrated its four hundredth anniversary in 2010.

Breakfast, lunch and dinner will be provided for PROMYS Europe participants in the college refectory or served in Wadham’s exquisite Hall.

Recent participants in PROMYS Europe had the following to say:

“The food and accommodation was simply perfect, almost pure luxury! The service was outstanding.”

“We were well catered for in Wadham in every sense of the word. I do not see how this could have been improved.”

“I was simply amazed by what I have seen in Wadham. The staff was extremely nice and helpful, everything was accessible in there (I had pretty much no need to leave the college), including food, which I was impressed by the variety which they were serving. I cannot compare this to anything I have experienced in my life. For me it was just perfect.” 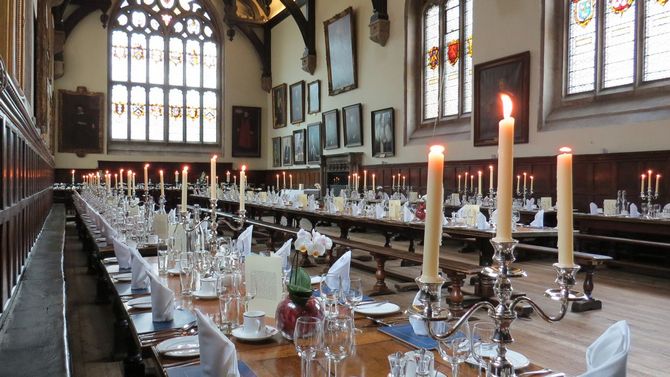 Some of the students will be housed in single rooms but most will be in twin sets (two single rooms with a shared living room and bathroom). Twin sets are shared by students of the same gender. Students in single rooms have an ensuite bathroom. Rooms for PROMYS Europe participants will be in close proximity to each other and counsellors will have rooms which are nearby. All rooms have a wash basin. Bed linen, towels, and pillows are provided. There is free wireless Internet, tea, and coffee in the rooms. There are laundry facilities in college which participants may use.

Most of the lectures take place in the Andrew Wiles Building, which is the home of the Oxford Mathematics Department and is about 10-15 minutres walk from Wadham. A common room is provided at Wadham where students can work together when they are not in the department. Participants have access to a gym and other facilities.